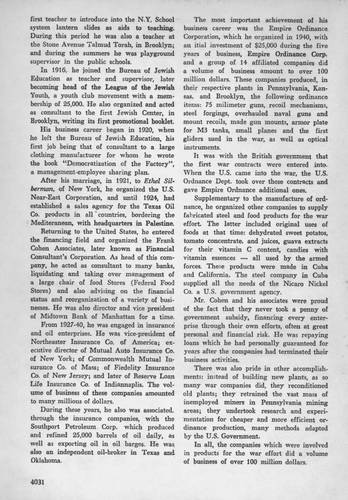 The most important achievement of his business career was the Empire Ordinance Corporation, which he organized in 1940, with an itial investment of $25,000 during the five years of business, Empire Ordinance Corp. and a group of 14 affiliated companies did a volume of business amount to over 100 million dollars. These companies produced, in their respective plants in Pennsylvania, Kansas, and Brooklyn, the following ordinance items: 75 milimeter guns, recoil mechanisms, steel forgings, overhauled naval guns and mount recoils, made gun mounts, armor plate for M3 tanks, small planes and the first gliders used in the war, as well as optical instruments.

It was with the British government that the first war contracts were entered into. When the U.S. came into the war, the U.S. Ordnance Dept. took over these contracts and gave Empire Ordnance additional ones. Supplementary to the manufacture of ordnance, he organized other companies to supply fabricated steel and food products for the war effort. The latter included original uses of foods at that time: dehydrated sweet potatos, tomato concentrate. and juices, guava extracts for their vitamin C content, candies with vitamin essences - all used by the armed forces. These products were made in Cuba and California. The steel company in Cuba supplied all the needs of the Nicaro Nickel Co. a U.S. government agency.

Mr. Cohen and his associates were proud of the fact that they never took a penny of government subsidy, financing every enterprise through their own efforts, often at great personal and financial risk. He was repaying loans which he had personally guaranteed for years after the companies had terminated their business activities.

There was also pride in other accomplishments: instead of building new plants, as so many war companies did, they reconditioned old plants; they retrained the vast mass of inemployed miners in Pennsylvania mining areas; they undertook research and experimentation for cheaper and more efficient ordinance production, many methods adapted by the U.S. Government.

In all, the companies which were involved in products for the war effort did a volume of business of over 100 million dollars.

first teacher to introduce into the N.Y. School system lantern slides as aids to teaching. During this period he was also a teacher at the Stone Avenue Talmud Torah, in Brooklyn; and during the summers he was playground supervisor in the public schools.

In 1916, he joined the Bureau of Jewish Education as teacher and supervisor, later becoming head of the League of the Jewish Youth, a youth club movement with a membership of 25,000. He also organized and acted as consultant to the first Jewish Center, in Brooklyn, writing its first promotional booklet.

His business career began in 1920, when he left the Bureau of Jewish Education, his first job being that of consultant to a large clothing manufacturer for whom he wrote the book "Democratization of the Factory", a management-employee sharing plan.

After his marriage, in 1921, to Ethel Silberman, of New York, he organized the U.S. Near-East Corporation, and until 1924, had established a sales agency for the Texas Oil Co. products in all " countries, bordering the Mediteranean, with headquarters in Palestine. Returning to the United States, he entered the financing field and organized the Frank Cohen Associates, later known as Financial Consultant's Corporation. As head of this company, he acted as consultant to many banks, liquidating and taking over management of a large chair of food Stores (Federal Food Stores) and also advising on the financial status and reorganization of a variety of businesses. He was also director and vice president of Midtown Bank of Manhattan for a time.

During these years, he also was associated, through the insurance companies, with the Southport Petroleum Corp. which produced and refined 25,000 barrels of oil daily, as well as exporting oil in oil barges. He was also an independent oil-broker in Texas and Oklahoma.