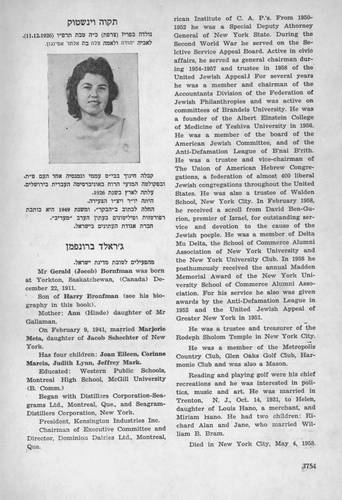 -1950rican Institute of C. A. P.'s. Prom 1952 he was a Special Deputy Athorney General of New York State. During the Second World War he served on the SeIctive Service Appeal Board. Active in civic affairs, he served as general chairman during 1954-1957 and trustee in 1958 of the United Jewish Appeal.l For several years he was a member and chairman of the Accountants Division of the Federation of Jewish Philanthropies and was active on committees of Brandeis University. He was a founder of the Albert Einstein College .1956of Medicine of Yeshiva University in He was a member of the board of the American Jewish Committee, and of the Anti-Defamation League of B'nai B'rith. He was a trustee and vice-chairman of The Union of American Hebrew Congregations, a federation of almost 400 liberal Jewish congregations throughout the United States. He was also a trustee of Walden ,1958School, New York City. In February he received a scroll from David Ben-Gurion, premier of Israel, for outstanding service and devotion to the cause of the Jewish poeple. He was a member of Delta Mu Delta, the School of Commerce Alumni Association of New York University and the New York University Club. In 1958 he posthumously received the annual Madden Memorial Award of the New York University School of Commerce Alumni Association. For his service he also was given awards by the Anti-Defamation League in 1953 and the United Jewish Appeal of .1951Greater New York in He was a trustee and treasurer of the Rodeph Sholom Temple in New York City.

He was a member of the Metropolis Country Club, Glen Oaks Golf Club, Harmonie Club and was also a Mason.

Reading and playing golf were his chief recreations and he was interested in politics, music and art. He was married in Trenton, N. J., Oct. 14, 1931, to Helen, daughter of Louis Hano, a merchant, and Miriam Hano. He had two children: Richard Alan and Jane, who married William B. Bram.