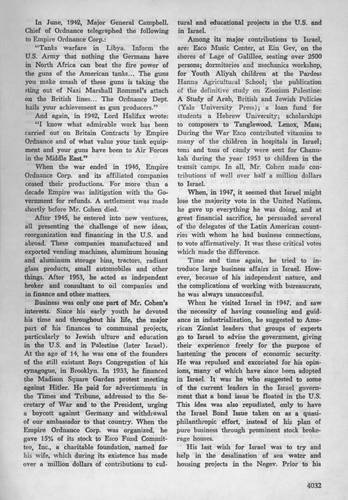 tural and educational projects in the U.S. and in Israel.

Among its major contributions to Israel, are: Esco Music Center, at Ein Gev, on the 2500shores of Lage of Galillee, seating over persons; dormitories and mechanics workshop, for Youth Aliyah children at the Pardess

Hanna Agricultural School; the publication of the definitive study on Zionism Palestine: A Study of Arab, British and Jewish Policies (Yale University Press) ; a loan fund for students a Hebrew University; scholarships to composers to Tanglewood, Lenox, Mass; During the War Esco contributed vitamins to many of the children in hospitals in Israel; tons and tons of candy were sent for Chanukah during the year 1953 to children in the transit camps. In all, Mr. Cohen made contributions of well over half a million dollars to Israel.

When, in 1947, it seemed that Israel might lose the majority vote in the United Nations, he gave up everything he was doing, and at great financial sacrifice, he persuaded several of the delegates of the Latin American countries with whom he had business connections, to vote affirmatively. It was these critical votes which made the difference.

Time and time again, he tried to introduce large business affairs in Israel. However, because of his independent nature, and the complications of working with bureaucrats, he was always unsuccessful.

When he visited Israel in 1947, and saw the necessity of having counseling and guidance in industrialization, he suggested to American Zionist leaders that groups of experts go to Israel to advise the government, giving their experience freely for the purpose of hastening the process of economic security. He was repulsed and excoriated for his opinions, many of which have since been adopted in Israel. It was he who suggested to some of the current leaders in the Israel government that a bond issue be floated in the U.S. This idea was also repudiated, only to have the Israel Bond Issue taken on as a quasiphilanthropic effort, instead of his plan of pure business through prominent stock brokerage houses.

His last wish for Israel was to try and help in the desalination of sea water and housing projects in the Negev. Prior to his

"Tanks warfare in Libya. Inform the U.S. Army that nothing the Germans have in North Africa can beat the fire power of the guns of the American tanks... The guns you make smash of these guns is taking the sting out of Nazi Marshall Rommel's attach on the British lines... The Ordnance Dept. hails your achievement as gun producers."

And again, in 1942, Lord Halifax wrote: "I know what admirable work has been carried out on Britain Contracts by Empire Ordnance and of what value your tank equipment and your guns have been to Air Forces in the Middle East."

When the war ended in 1945, Empire Ordnance Corp. and its affiliated companies ceased their productions. For more than a decade Empire was inlitigation with the Govermnent for refunds. A settlement was made shortly before Mr. Cohen died.

After 1945, he entered into new ventures, all presenting the challenge of new ideas, reorganization and financing in the U.S. and abroad. These companies manufactured and exported vending machines, aluminum housing and aluminum storage bins, tractors, radiant glass products, small automobiles and other things. After 1953, he acted as independent broker and consultant to oil companies and in finance and other matters.

Business was only one part of Mr. Cohen's interests. Since his early youth he devoted his time and throughout his life, the major part of his finances to communal projects, particularly to Jewish ulture and education in the U.S. and in Palestine (later Israel). At the age of 14, he was one of the founders of the still existant Boys Congregation of his synagogue, in Brooklyn. In 1933, he financed the Madison Square Garden protest meeting against Hitler. He paid for advertisments in the Times and Tribune, addressed to the Secretary of War and to the President, urging a boycott against Germany and withdrawal of our ambassador to that country. When the

Empire Ordnance Corp. was organized, he gave 15% of its stock to Esco Fund Committee, Inc., a charitable foundation, named for his wife, which during its existence has made over a million dollars of contributions to cul